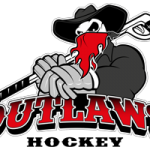 What a turnout three goalies and twenty one players. I think some were still feeling the buzz from last weeks charity game. Two guys missing were R Tyson with a damaged thumb. The other N Shannon with a broken wrist. No it never happened in a flashpoint hockey brawl. More likely stiffened someone at the last Clan game. ( Mon the Panthers. ).
After picking the lines I realised the colours were all defence players bar one. However the old pros, Like Lawrie, J Wylie, Cally, and myself, with our speed, and arsenal of tricks. We were able to play in any position.
As soon as the puck was dropped, H Dog was off like a rat up a drain pipe. Twisting and turning in and out the colours defence, with no one between him
and the colours goalie. He lets go a wrist shot !!! The goalie sticks out his mitt as though he was waving down a bus and catches the puck.
Enough of this shit ?
It was a very hard fast tight game. It was the usual guys scoring the goals. H Dog, Cally, D Davidson, etc. The final score was 8 – 6 to the whites.
It was good to see A Smith,Faith, J McPaul, and J Barr back with us.
Jaqui has set up a goalies page. Which means she will know if we have two, three, or maybe no goalies on a Sunday. Thus keeping myself in the loop, along with Lawrie. So he does not have to keep carrying the clangers in and out on a Sunday morning.
Now I will put the wee buggers and his side kick out their misery ? Yes Albert scored a goal, assisted by the lovely Elaine And Billy sliped one passed Ross’s Shoulder, A Puck that is.

With the last of the donations handed in on Sunday. Moneys raised, counted, and paid into the bank today. Totals £ 1, 391. After a brief discussion with Albert and Pat. We agreed to bring the donation up to £ 2,000. The parents and families of the two boys have passed on their thanks to everyone who helped make this happen.
Can I ask everyone to pass on our thanks to their families and friends, who gave up their time to come along, and those who never managed to see the game . Yet dug deep, for such a great cause.
Albert and I will be going to the sick childrens one day next week to hand over the cheque.
Thanks Davie.