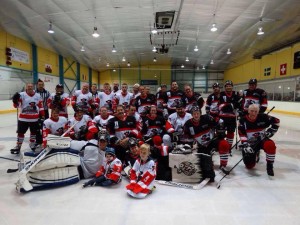 As everyone in the Outlaws know we have a charity game once a year. Normally we throw the names of charities at the guys, and come up with the charity we are playing for. One day a few months ago after being forced to work like a pit boy at Albert’s farm. I realised how lucky I was when Albert’s wife Joan came home. She Knew how the kettle worked. As we were having a coffee, Alberts daughter Natalie asked if we were having another charity match, and asked if we would give thought to having a thank you match for James Lumsden, and Matthew Fraser. This would be so we could raise money for the Schiehallion ward 2A Sick Children’s Hospital on their behalf.
After telling the guys at the club what we were planning,. everybody was up for it, and the sooner the better. So Albert and I set the wheels in motion. From booking the ice at an appropriate time, to making sure we had enough people to play. ( Summer holidays ).
We decided to have a raffle, sell programs,, give teas, and coffees at a small cost. This was something we had never tried before, and proved to be very successful.
The tension and excitement in both changing rooms was building, the noise of the usual banter, and chatter began to fade as the tension grew . Then bang ? would you believe it ! It was almost all out war in the colours changing room when we noticed an infiltrator. Like a homing pigeon Albert made his way to his bench seat. We let him settle for a minute, and then asked him in a very polite manner, to leave, offering him a hand, and a few kind words, as we showed him the door. Well,,, what he said to us on leaving, was not for the faint hearted. In fact one of the new guys thought he was spouting off in some Italian dialect.
Before the game began we gathered the team on the ice to present the young lads with an Outlaws jersey and an ice hockey medal. On looking round the rink, I was surprised at the amount of people coming in the door.

The puck was dropped and the game started at the usual hundred miles an hour. This time round everybody seemed to be playing as though their lives depended on it. This was a different feeling to our Sunday morning session. Mr McGrotty was right when he said it had taken to the end of the first period for both teams to settle. I wont bore you with who did what. This was a hockey match. Not a drop in hockey session
Hot Dog opened the scoring for the whites, then minutes later D Davidson scoring for the colours. We could see from the first period this was looking to be a tight game. Ten minutes into the game one of the whites got two minutes for slashing which the colours never seemed to take advantage of.

The second period seemed to be faster and harder. With the whites edging ahead 5 – 3 we could hear most of the crowd starting to support the whites. Every time H Dog collected the puck his fan base would start to make noises. It was obvious one or two of the older women had wee thing for him. Probably they wanted him to sign a program Or maybe some of the whites fans wanted a nude photo of J Wylie to put in their window to keep burglars away.

After a fifteen minute recess, the third period got under way. It was obvious the tension off both teams was being sensed by the refs. In the last period they had given two minutes to one of the whites for hooking. Though the whites tactics were starting to pay off, by closing down the colours forwards and giving H Dog the chance of breaking away to score.
The final score was 8 – 4 to the whites. With a game that had every thing that the new and old to ice hockey wanted to see. From goals, to penalties, and a wee skirmish. near the end of the match.

I cant thank everyone enough for making our charity match happen. From Alberts wife Joan, his sister in law, my wife. who worked non stop at the door, selling raffle tickets, teas, and coffees.
M Laird for making the posters, and programs. Big Bear bakery for supplying cakes. The ladies in the club who brought along more cakes, and biscuits.
A big thank you to Dougie Berry, Matthew Frasers Granda. For stepping in at the last minute to call the raffle.
James Morris and his wife for doing the time clock.
To all the guys at the outlaws. A big thanks from Albert and I for helping two wee boys. Say thanks to people who do so much for them, and many more. Who come through their ward.
See you Sunday,
Davie.